This weekend was finally warm (over 50 degrees), but rainy. The boyfriend was out of town, and I had all day Saturday to myself. So I took the opportunity to jump in and get my hands dirty! Here’s what I did: 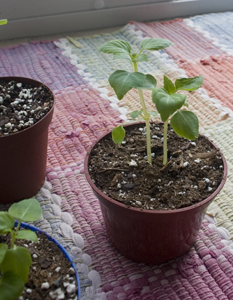 I transplanted all of my Impatiens seedlings into larger plastic containers. They were getting too tall for my flats, and the root systems were growing together. It was definitely time to move them to bigger containers. They all seem to be doing really well now that I have moved them to bigger pots. It seems as if they just keep getting taller every day! I think they should slow down here soon, because all of the Impatiens I’ve had before never got much taller than my seedlings are now.

I am actually quite impressed with myself and the fact that I’ve managed to keep all of my seedlings alive thus far with only one South facing sunny window and no grow lights! My apartment is too small, and I am too poor for grow lights right now. I think that the sunny window is working just fine for now; my roommate might be going crazy about the amount of plants that I have in the office, but I have assured her that I will be taking all of my little babies outside once it is warm enough. Honestly, I think that knowing that is the one thing that has kept her from freaking out and throwing them all out the window. I guess it does look a bit like a small jungle in here.

My other seedlings are not far behind my Impatiens, and some of them may need to be moved up to bigger pots by this next weekend! My snapdragons are getting pretty tall, and will probably be the next ones that need to be potted up. My Four O’Clocks seedlings are enormous right now, and can’t wait to go outside. Hopefully within the next few weeks I can start taking some of them out at least in the afternoons. 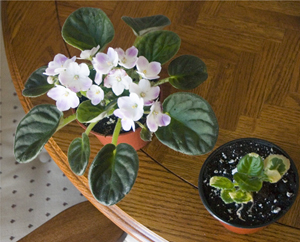 Next, I repotted both of my African Violets with better soil. Can you tell which one I’ve had more time to kill? The flowering one I just got a few weeks ago, but the tiny one with browning leaves I have had for a while. I’m not sure how I managed to make it look this way. I had it sitting in bright indirect sunlight, and watered it under the leaves, which should have made it happy. So, after a bit of research I decided that they both needed better soil. This conclusion proved correct when I finally took them out of their current pots and saw the condition of the soil. It was dry as a bone and pretty much hard as a rock. I haven’t had either of these plants for too long, so I figured they wouldn’t need to be repotted right away; I was wrong. I found that it is actually a good idea to repot your African Violets as soon as you get them.

The reason for this is because African Violets need soil that will allow for good drainage. This fresh potting soil will also give the plant more nutrients. One recommended potting mixture for African Violets is 1 part perlite, 1 part peat, and 1 part vermiculite. There are other mix recipes you can find online that contain soil as well. You can certainly make your own, or if you prefer a faster method you can always buy some pre-mixed African Violet soil. This is what I did, but I added a little more perlite to the mixture. It has only been a couple days, but I can already tell that both of the plants are perking up!

Lastly, I tried to divide my Peperomia Isabella- not a good idea. I found mine at the local WalMart in a large hanging basket- it was huge! It was so thick that I couldn’t even see or feel the dirt to see if it was dry before watering it, and all of the leaves on the underside were turning crunchy and brown and falling off. Anyways, I tried to divide it and it pretty much fell apart. The root system on this plant is quite small. Not to mention that the vines were very tangled up. I think it may have been a better idea to just move it up to a larger pot.

This picture on the left is what I managed to split of from the main plant. Some of it is dying, and some of it isn’t. I have tried to look up this particular variety of Peperomia, and have found very little. It seems like quite a hardy plant thus far, and I’m sure it will be just fine after my uneducated mutilation of the poor thing.

All of this was done inside, which was kind of messy and required a good sweeping afterwards. I am hoping that I will be able to use the patio for my gardening soon! If I am correct, I think that the average date of our last frost is sometime in May. Either way, I am just happy because it can’t get cold again at this point! Happy Gardening!